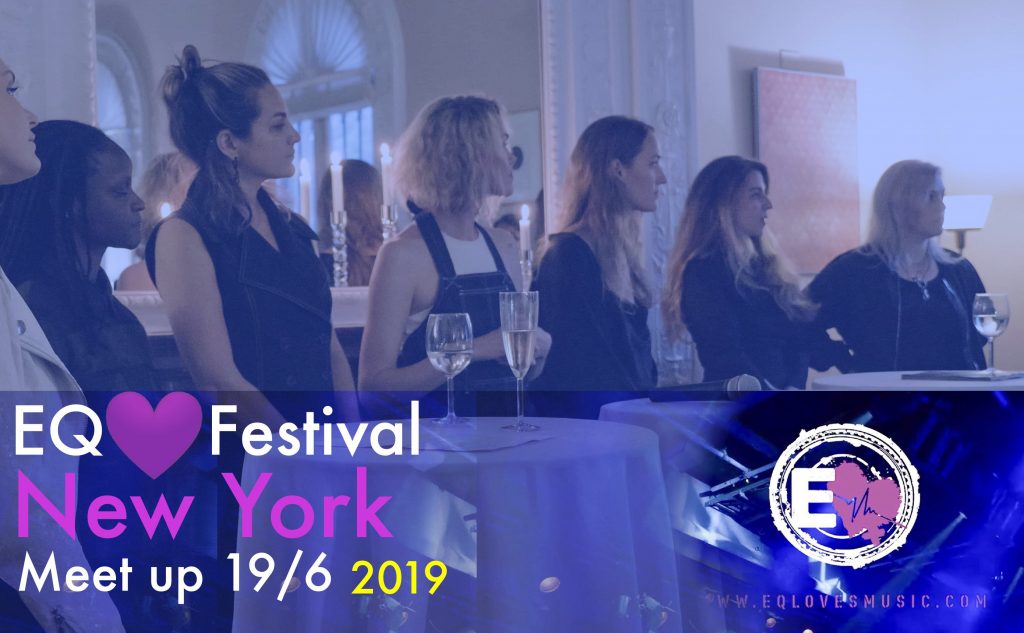 On Wednesday 19 June, EQLovesMusic and the Swedish Consulate General in New York presented the first part of EQLovesFestival 2019. The event was an invite only and was held at The Swedish Residence, 600 Park Avenue.
EQLovesMusic collaborated with the organization Beats By Girlz NY to invite local guests and together with EQLovesMusic moderate the program which consisted of a panel discussion and also networking. The panel consisted of American and Swedish role models in music production.

The Swedish, Gothenburg-based non-profit organization, EQLovesMusic, which organizes EQLovesFestival for music production and gender equality every year, has begun this year’s festival program a little differently from previous years. Namely by arranging and holding an industry event in New York.
The purpose of this event was partly to create professional relations between Sweden and the USA and partly to be inspired by personal stories from female role models in music production during a panel discussion moderated by representatives from EQLovesMusic and Beats by Girlz NY.

The event was filmed and highlights will be shown at EQLovesFestival Gothenburg in September.

The evening started with networking and was followed by a welcome speech by Consul General Annika Rembe. Both organizations were given the opportunity to present their organizations and after this an inspiring and emotional panel discussion took place between the invited role models that were; from Sweden, Linn Fijal, head of RMV-Studios (Riksmixingarverket), more known as Benny Andersson’s studio, and Ana Diaz, who has worked with names like David Guetta, Britney Spears, Wyclef Jean et al., Melisha Linnell – Music producer, technician and sound engineer who is a teacher in music production at the University of Stage and Music in Gothenburg. The USA was represented by Erin Tonkon who worked with Lady Lamb and David Bowie’s last album “Black Star”. Gloria Kaba who worked with Madonna on her “Ray of Light” album as well as with Beyonce, Phil Ramone, Kanye West, Salaam Remi, Aretha Franklin and Frank Ocean. Heba Kadry who worked with eg. The Mars Volta, Slowdrive, Lightning Bolt, Beach House and Björk’s latest album Utopia. Valerie Orth, songwriter and producer who produces her own music as an artist.

The role models generously shared their personal stories, anecdotes, and experiences of working in the industry as music producers with the challenges of not belonging to the norm of this proffession.

The well-reputed Swedish manager and A&R: a Peter Swartling was also there and got the chance to talk about his experiences as a manager of a female music producer. Export music sweden was represented by Jesper Thorsson who also contributed to the event by helping with invitations.

The role models were agreeing on the importance of networks and inspiration for supporting upcoming music producers who do not belong to the norm and that the event that was held contributed to creating new contacts and opportunities for future collaborations between the USA and Sweden.

“I thought the event was good, it was a very inspiring meeting and I am sure that it will lead to future collaborations.” – Linn Fijal, RMV

“It was exciting for us at the Consulate General to coordinate and host an event that so clearly highlights the gender equality work in the industry and connects leading role models from Sweden and the USA. The combined competence, the desire to share personal experiences and the generous atmosphere in the room meant that the conversations flowed and will hopefully lead to several collaborations and exchanges going forward.”

From the Swedish music industry:
Peter Swartling – The well-known manager and A&R who worked on developing Red One, Robyn and Mwuana.
Jesper Thorsson – CEO of Export Music Sweden with 20 years of experience in the music industry such as record company director at Warner Music Sweden and Roadrunner Recordings.

From the Consulate:
Niklas Arnegren, Head of Cultural Affairs and Public Programs, who also helped to organize and structure the event.

Swedish EQLovesFestival highlights female role models specifically in music production – an area where only 5% of women are represented and where there is a systematic invisibility and dismissal of women since the beginning of the history of recording and music production.

According to the organization Women’s Audio Mission, the proportion of women in music production is only 5% globally. In the Swedish Grammis Gala, four women and 49 men, respectively, have been praised in the category “Producer of the year” since the price was instituted. The proportion of male songwriters in the Swedish Melodifestivalen is 70% and the proportion of female producers is disappearing. Of Stim’s 80,000 affiliated authors, only 20% are women. On Spotify’s top list of the most popular songs in 2016, a total of 226 songwriters were involved, of which 31 were women (13.7%) and 195 men (86.3%). Only 6.3% of the thirty highest-earning authors between 2010 and 2016 were women.

This wants EQLovesFestival, which this year takes place for the third consecutive year in Gothenburg, to participate and change. With the festival, EQLM wants to focus the spotlight on the fantastic role models that exist around Sweden and the rest of the world and create room for conversations about these important issues. EQLM also aims to cooperate with other similar networks within and outside Sweden.

EQLovesFestival is organized by the non-profit organization EQLovesMusic, which is also a network of female music producers. The festival is supported by the Swedish Arts Council and the Music Agency, Göteborg o Company and the Gothenburg Academy of Music. Sponsors like Harrison Mix Bus Consoles and Lindell Plugins also contribute to this event by sponsoring our role models with the latest in music programs and plugins available on the market today.