On Sunday the 26th of August 2018, EQLovesMusic were invited to Atelier for Young Festival Managers. A festival networking event that is hosted by and co-organized by Kultur I Väst and Sweden Festivals. This was the 14th edition of this 7 day long event.

Melisha Linnell and Sarah Hansson were the representatives of EQLovesMusic, and the other participants were all selected from 23 different countries including Norway, China, Congo, Canada amongst others. 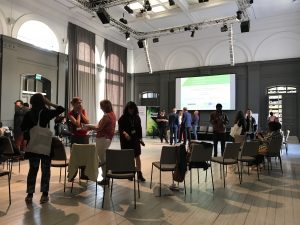 Melisha and Sarah were invited by Kultur I Väst and joined only for 1 day. The afternoon started with new participants presenting where they were from and what organisation they worked in. EQLovesMusic presented their big event EQLovesFestival 2018.

After this it was time for dinner, an all vegan buffé. All participants were encouraged to spread out around the many tables so that they could get as much out of networking as they could.

After dinner it was time to move to Kultur I Västs offices to listen to presentations and performances from the participants.

It started out with beautiful Violin followed by traditional Norwegian dancing with all the participants joining in to dance and sing together.

Melisha and Sarah both performed their versions of Change Is In The Air.

Overall, it was a great event that lead to new contacts that are important for future work.