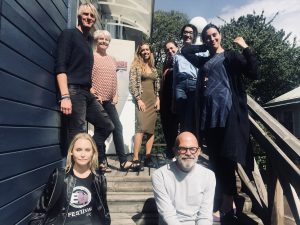 Saturday, during Way out west festival, EQ loves music was invited by Keychange project to participate in a Round the table talk about equality in music business. We went there 11.00 and were welcomed by Ragnar Berthling who’s working for Keychange.

The talk started with a couple of people discussing the question of pay gap and regulations around that in different countries, among the persons around the table was Vanessa Reed (UK) CEO of PRS Foundation and Sigtruggur Baldarsson, head of Iceland Music Export and partner in Keychange. More and more people joined in the discussions around the table.

Equalizer project was introduced by Amanda Waldås from Spotify and the discussion went to Spotify and what they could do to change the structures of inequality in published music.

The discussions went from questions about live music issues such as numbers of women in bands at festivals to the small percentage of non male producers represented in music business, to the number of non male decision makers in high posts in music companies and organisations. Ultimately posing the question as to how we can adress these problems.

EQ Loves music representatives were impressed by the openness in the discussion and the honest intentions by all participants to brainstorm together to adress these challenges.